On March 23, 1775 Edward Carrington stood outside the window of what is now known as St. John’s Church. A group of about 100 of America’s earliest leaders gathered at the small church in Richmond’s East End for the Virginia Convention.

Patrick Henry, a man known as a powerful orator stood near the window and delivered a speech that would go down in history as his Give me Liberty, or Give me Death speech. His speech swayed members of the Virginia House of Burgesses to send Virginia’s militia to the front lines of the Revolutionary War. Henry’s words rang out amongst the crowded room and into the churchyard where Carrington stood:

It is in vain, sir, to extentuate the matter. Gentlemen may cry, Peace, Peace–but there is no peace. The war is actually begun! The next gale that sweeps from the north will bring to our ears the clash of resounding arms! Our brethren are already in the field! Why stand we here idle? What is it that gentlemen wish? What would they have? Is life so dear, or peace so sweet, as to be purchased at the price of chains and slavery? Forbid it, Almighty God! I know not what course others may take; but as for me, give me liberty or give me death!

Baird explained that there are roughly 13,000 people buried in the churchyard, many of which lie in unmarked graves. The churchyard is the final resting place for many of Richmond’s most prominent figures, as well as the average citizens who lived during the colonial era.

Originally, Baird explained, William Byrd II, the founder of Richmond, designated half of the block where St. John’s Church is located to the Anglican Church of England. After the church was completed in 1741, Baird said people immediately began burying their deceased loved ones there. At that point, he said, the cemetery belonged to the church and was on the south half of the block. 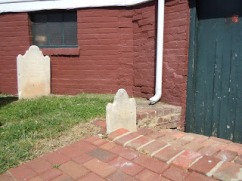 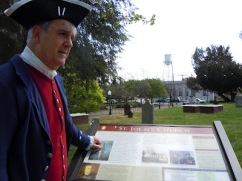 The churchyard was later expanded because the City of Richmond needed a public burial ground. The city then purchased the north half of the block to establish the first public cemetery.

“When people first started to be buried, a lot of them didn’t have a lot of money, so the graves were marked with simple stones, piles of stones and wooden crosses. They have long since gone. There are bodies all under the sidewalk,” Baird said.

He explained that the churchyard didn’t have a fence around it during the colonial era so people’s farm animals wandered freely in the churchyard and rooted around in the graves. At the time the law did not require anyone to pen their animals, so the only way to keep them out was to build a fence.

Baird added that many of the tombstones were not added for looks, but to keep animals from destroying the graves. However, only the wealthy were able to protect their graves.

Throughout the churchyard, Baird pointed to areas of decay. The epitaphs on some of the tombstones have faded or washed away, but Baird pointed out that some have been preserved by the family of the deceased. He explained that many of the tombstones were made of sandstone which weathers more quickly than slate. As the church expanded, Baird added, some of the graves were built over.

Although the physical decay of the cemetery is visible to tourists, visitors are lured by the history and the stories that surround the churchyard.

Sueann McCauley, a Charlottesville resident, said that she and her husband, Byron McCauley, and her friend, Jacqueline Hollinge, have been on a historical tour since Friday. She said they were on a tour to learn more about the Revolutionary War and the founding fathers.

Sandi Bergman, the ghost host at Haunts of Richmond, who gives haunted ghost tours around Richmond, said she decided to feature St. John’s Churchyard in the Church Hill Chillers tour because there are some great ghost stories surrounding the churchyard. She added that many of the stories are based on historical events.        The stories surrounding St. John’s Churchyard range from a ghost story about an apprentice gunsmith to a man buried outside of the window where Patrick Henry gave his famous speech.

Bergman said that her favorite ghost story is about a man named Daniel Denoon whose ghost doesn’t like to be confined to the churchyard. Denoon, she said, was an apprentice to a well known gunsmith, James McNaught. Before his death, Denoon completed his internship and was working as an office manager in McNaught’s shop. McNaught knew Denoon’s popularity as a gunsmith had grown and he feared losing him at the shop.

According to Baird, McNaught, having reached a drunken state one day, called Denoon to the top of the steps of the shop, located around 18th and Franklin Street, and shot him.

Elizabeth Arnold Poe was very well liked in Richmond, Bergman said, but she was an actress which was not an appropriate career for a Christian woman during that time. However, because she was so well liked, the church parishioners petitioned the fathers of the church to allow her to be buried in the churchyard.

The fathers of the church agreed, Bergman said, but they would not allow her to have a headstone.

Baird explained that her body was placed in the south east corner of the graveyard five steps away from a yew tree, known as a symbol of eternal life. The location of her approximate burial plot is now marked by a tombstone with a small yew tree planted beside it.

Edgar Allen Poe has yet another connection to the churchyard, Baird explained. A brick building visible just beyond the trees in the south portion of the churchyard was the home of Elmira Shelton according to Baird. Shelton is said to be Lenore, the subject of Poe’s The Raven.

Baird explained that Poe was said to have visited her in her home two days before he left for Baltimore where he died. Although Shelton never publicly admitted it, Bard said there is speculation that she and Poe were engaged just before his death.

Baird emphasized that although Poe was born in Boston, he considered Virginia home, so that itself is an important aspect of the history here.

“It [touring historical places] makes more of an impression than reading in a book and looking at a picture of it. They’ll [children] remember doing things because it’s tactile,” Gray said.            Katherine Gray, a Chesapeake resident, said she brought her family to visit the churchyard because when she was a child she was “dragged” around Virginia to different historical sites and it made a positive impact on her.

Sueann McClauley said that after growing up in the western portion of the United States and learning history from a different perspective, she has enjoyed living in Virginia and being able to experience places like St. John’s Churchyard that allow tourists to walk in the footsteps of people such as some of the founding fathers.